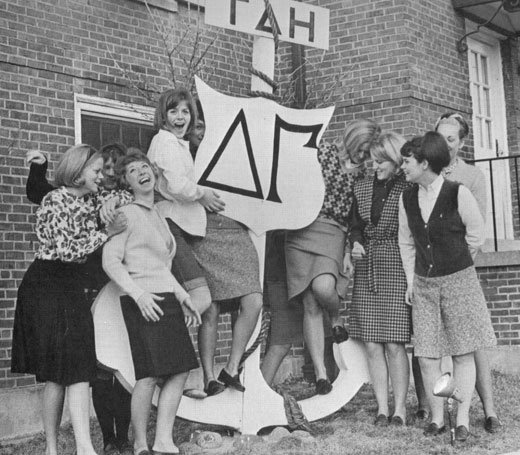 For more information regarding specific opportunities with Alpha Nu Chapter, or the dates of upcoming events, please contact the Director of Alumnae Relations, Isabella Armenteros, at iarmente@usc.edu.

Paige Adams-Geller, also known as the "Queen of Jeans" according to People magazine, is the founder of Paige Denim. After being crowned as Miss California 1991, Geller began to work as a fit model for designer denim brands like True Religion, 7 for All Mankind, and Citizens of Humanity. From there, she decided to create her own denim brand, which is now sold and loved internationally by some of Hollywood's hottest celebs.

A CBS Sports reporter, she covers college football and contributes to The NFL Today, the Network’s NFL pregame studio show, the late night coverage of the U.S. Open Tennis Championship, as well as serving as host for TNN’s coverage of the Arena Football League. She has served as afternoon and evening anchor of ReporterTV.com, while also serving as producer/correspondent for Main Floor and Real TV (1994-2000).

Kelly Ayotte is an American politician and United States Senator for the state of New Jersey, serving since 2011.

Sabrina is an actress, singer, dancer and was one of the members of the Disney Channel musical group Cheetah Girls, where she played the character Dorinda. Sabrina has performed on ABC's Dancing with the Stars and also has her own dance/fitness video for girls titled BYOU.

Cheryl Crawford is a Broadway producer of hit plays Brigadoon, The Rose Tattoo, and Paint Your Wagon. Founder of Group Theater and Actor’s Studio.

Emerson is a member of the U.S. House of Representatives for Missouri's 8th district that has been serving since 1996.

American television hostess, most known for her role as host of Dancing with the Stars with Tom Bergeron. For the past two years, she has also been a correspondent for Entertainment Tonight.

The Emmy Award winning actress currently portrays Debra Barone in Everybody Loves Raymond on CBS. Television credits include thirty something, Room for Two (1992), and Someone Like Me (1994). Film credits include Memoirs of an Invisible Man (1992) and Beethoven (1992). She is also the author of Motherhood and Hollywood.

President and CEO of Victoria's Secret.

The Emmy Award winning actress portrayed Dr. Kate Austin in the CBS television show Chicago Hope. Her feature film debut was in 1979 with the lead role in And Justice For All. Other film credits include Swing Shift (1984), Just Between Friends (1986), Running on Empty (1988), Gross Anatomy (1989), Funny About Love (1990), and Leaving Normal (1992). She won an Oscar in 1996 for Best Short Live Action Film, Lieberman In Love, in which she starred and directed.

Julia Louis-Dreyfus is a 1996 Emmy Award winner for her portrayal of Elaine Benes on NBC’s Seinfeld. She has also won the 1993 Golden Globe Award for Best Supporting Actress in a Comedy Series and three American Comedy Awards as Funniest Supporting Female/Television. She was a member of the Saturday Night Live cast from 1982 to 1985. Her film credits include Hannah and Her Sisters (1986), Soul Man (1986), and National Lampoon’s Christmas Vacation (1989).

Joan Lunden’s: “Best known as former co-host of ABC’s “Good Morning, America," Joan currently stars in “Behind Closed Doors with Joan Lunden." She is the author of several books, including Joan Lunden's Healthy Living (Crown Publishers, April 1997). She is also the national spokesperson for MADD - Mothers Against Drunk Driving.

News anchor and correspondent for CNN/U.S. Based in the network's world headquarters in Atlanta, Phillips anchors the weekday newscast Live From along with CNN's Miles O'Brien.

Judge Sarah Tilghman Hughes was the first female federal judge, and the first woman to swear in a U.S. President (Lyndon B. Johnson, on the day of the assassination of John F. Kennedy in 1963). In 1961 she was appointed to the federal bench by President Kennedy, and in the 1930s she served two terms in the Texas House of Representatives.

Joined FOX News Channel (FNC) as Los Angeles based correspondent in October 2001. Before joining FNC, Vogel worked as a reporter/fill-in anchor at KCRA-TV (NBC) in Sacramento, CA, where she covered the California State Legislature and the Governor's Office. Prior to that, Vogel served as a reporter for WTLV-TV (NBC) in Jacksonville, FL where she was part of a team that earned an Edward R. Murrow and Regional Emmy award for Best Newscast. Also, she worked as a reporter for WJET-TV (ABC) in Erie, PA, where she was honored with a Pennsylvania Association of Broadcaster's award for Best Documentary. Vogel began her journalism career at ABC News in Washington, DC as a desk assistant for This Week with David Brinkley.